The Panini Adrenalyn XL 2021-22 collection is the 13th Edition of the most popular trading card collection in the Spanish league. It contains 471 different cards, apart from the BASIC series, it is completed with the entire block of special series: IDOL, GOLDEN GLOVE, TURBOMAN, DIAMOND, UNTOUCHABLES, DOUBLE FIGURES, BRAVO, SUPERCRACK, GOLDEN BALLOON, GOLDEN BALLOON EXCELLENCE and a CARD. INVINCIBLE. It is completed with more signed limited editions and a new update series. 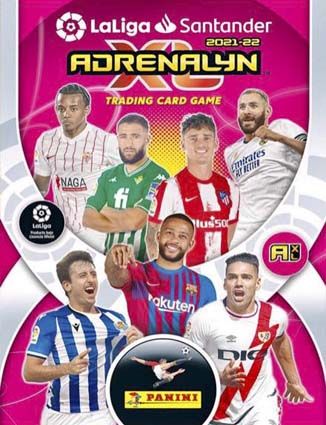 The 12th Edition of the Panini Adrenalyn XL collection of the Spanish League has a total of 471 different cards. 360 of them are the basic ones and then comes the whole block of special series: IDOL, GOLDEN GLOVE, TITAN, DIAMOND, GOAL FACTOR, SUPER HERO, THE CHAMPION CARD, SUPERCRACK, GOLDEN BALL and an INVINCIBLE CARD. This edition adds a Ballon d'Or Excellence and is completed with more signed limited editions and a new update series. 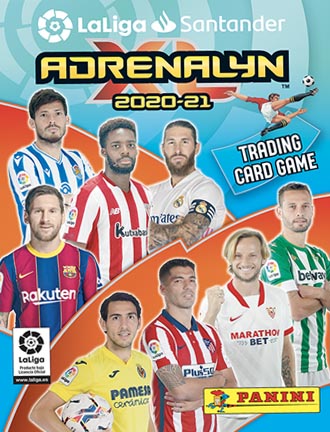 The 11th Edition of the Panini Adrenalyn XL collection of the Spanish League has new series such as the Card Trident, the brilliant Diamonds series, the new Meteorites, Double Ironman, Plan A and others already traditional in the collection such as idols and supercracks . To be highlighted as each edition of the Golden Ball and the Invincible Card. The most complicated cards are the signed Limited Edition and the Limited Editions. 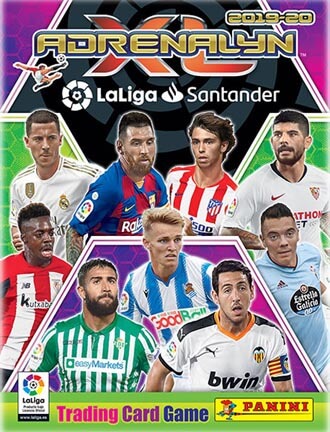 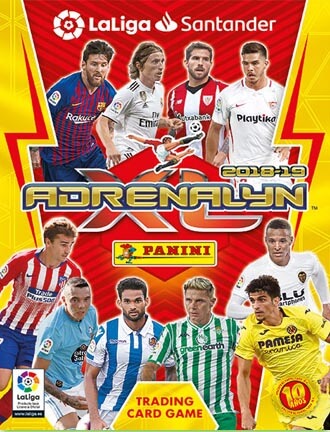 This edition of Panini Cromos Adrenalyn 2017-18 there are a lot of new features, the old Porterazos are now called Golden Gloves. The series of Super Heroes and also the Ballon d'Or series are extended to 5 trading cards. Ironman is the absolute novelty of this season of Adrenalyn XL Liga Santander 17-18- Do not forget the Limited Edition cards that, if you wish, can round off your collection in a perfect way. 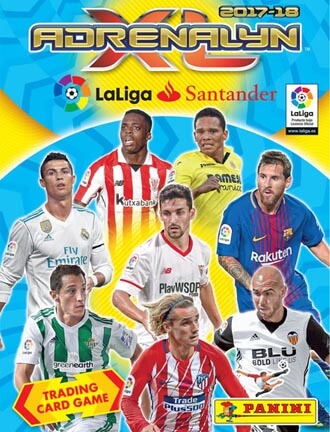 Now you can enjoy again with ADRENALYN XL ™ Liga Santander 2016-17, the collectible card game that causes a rage throughout Spain. And this year it does it with amazing surprises, because it has completely consolidated its virtual dimension and playing against a family member, a friend or a rival from any point in the entire Spanish geography, and also fantastic tournaments that will allow you to qualify for great prizes. A real joy for an entire ADRENALYN XL ™ master like you. 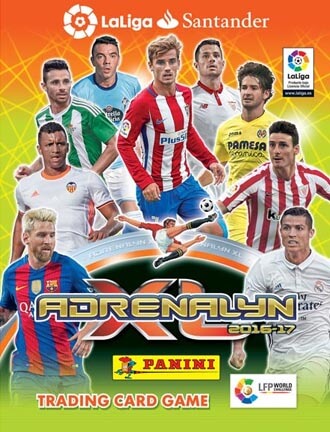 Panini Adrenalyn XL 2015-16 is the great game of the BBVA League of trading cards that is published for the seventh consecutive season. It is a complete collection, updated and of a spectacular quality, adrenalyn xl liga bbva 2015-16 of Panini contains the already classic series such as the Idols, the Porterazos or the more complicated the Ballon d'Or. Do not forget the Panini Limited Edition cards Adrenalyn 2015-16, all spectacular, all with powerful scores. 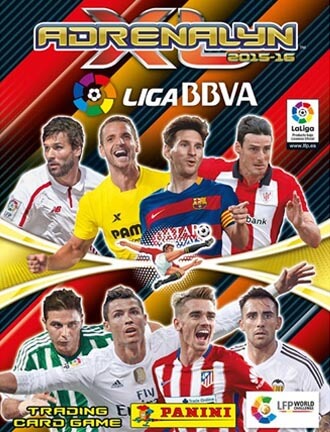 For the sixth consecutive season, Panini's Adrenalyn Xl 2014-15 collection is the great game of the Liga BBVA with trading cards from the Spanish league. The 2014 Adrenalyn XL trading cards represent the 20 teams in the league and the best players from each team in their special glossy series. In this edition a new series called Duos Imparables is added with the two players who form the best tandem in each team in the 2014-15 Panini Adrenalyn league collection. 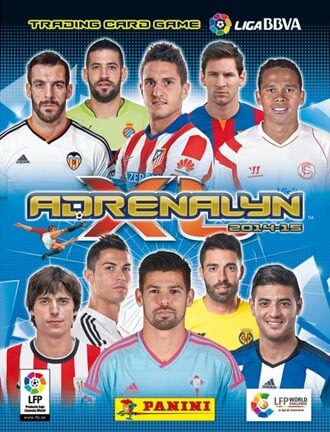 For the fifth consecutive year, the Panini Adrenalyn 2013/14 collection brings us the best trading cards in the Spanish league. It is the most complete, up-to-date and spectacular quality collection in the 2013-14 Liga BBVA. We found 2 new series: the Jugones and 11 de Diamonds. The most complicated cards of Adrenalyn Xl bbva 2013-14 are the golden balls. Don't forget the Limited Edition series with the most exclusive trading cards of Adrenalyn xl 2013-14. 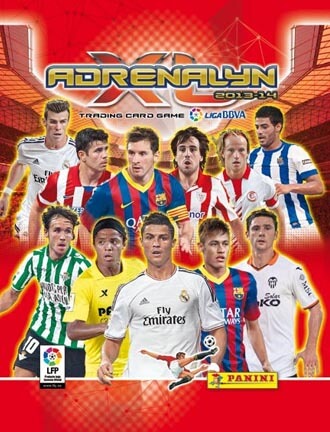 Panini Adrenalyn 2012-13 is the great trading card game of the Liga BBVA season 2012 2013 consisting of 378 basic cards with 18 players for each of the 20 teams that make up the Adrenalyn xl 2012-13 collection. The basic cards have two new features this year. The Plus Defense and Plus Wildcard series. Also the cards of the special series like Porterazos, Idols, Supercracks and the Ballons d'Or of Adrenalyn Liga 2012-13. 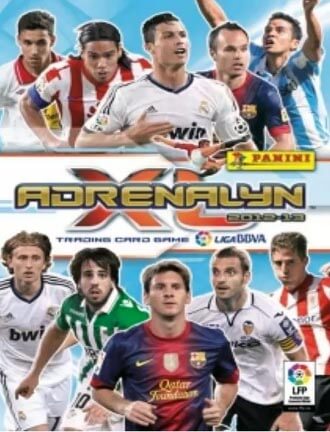 Adrenalyn's great trading card game links bbva 2011-12. This is the third edition of Adrenalyn XL by Panini and you can gather an unforgettable collection from the 2011-12 Liga BBVA. Panini Adrenalyn XL 2011-12 consists of 378 basic cards with 18 players for each of the 20 teams in the League. Also from brilliant special series featuring the best players from each team to complete the 2011-12 Adrenalyn league collection. 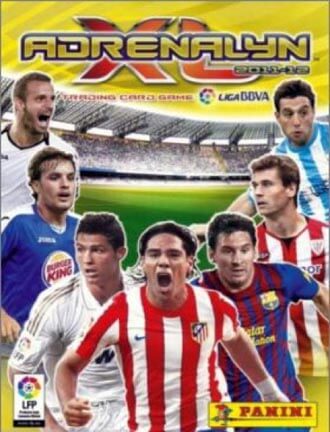 For the second consecutive year the Panini Adrenalyn XL 2011-12 collection brings us the best trading cards in the Spanish league. Official Trading Cards Collection of the Panini League Adrenalyn liga bbva 2010 11. You can buy any of the adrenalyn stickers 2010-11 in perfect condition and at the best price. Check the archive of all Adrenalyn XL editions so far. 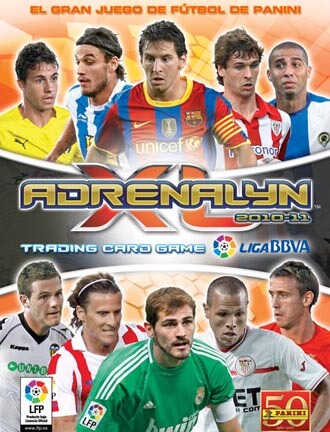 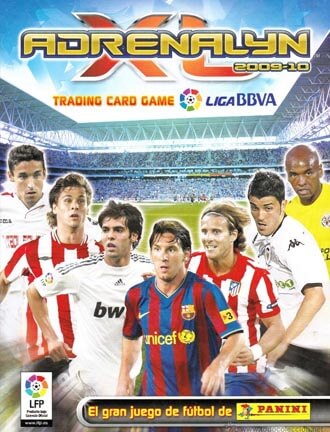